DARE conferences and symposia connect the expert and interested, the academic and the practitioner.

Past events have included: – 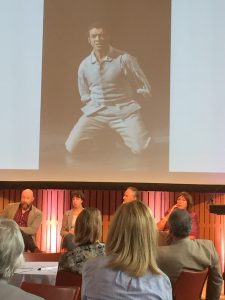 Unfrozen: Reports from the Ice. 19 October 2018. To mark Green Great Britain Week, Opera North hosted the Priestly Centre for Climate’s lunchtime lecture Unfrozen: Reports from the Ice. University of Leeds scientists including Dr Christian Maerz of the NERC Changing Arctic Ocean Seafloor (ChAOS) project and Dr Jenine McCutcheon of the NERC Black and Bloom project described the changes they have witnessed. The lecture has been recorded and can be viewed on YouTube.

A Beautiful Death: 18 February 2015. Howard Assembly Room. Leading thinkers and artists explored the relationship between violence and its artistic representation in film, opera and visual arts. 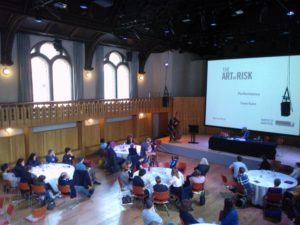 The Art of Risk. 26 June 2014. Howard Assembly Room.  This one-day event brought together people from a range of backgrounds, including arts, medicine and psychology.  It explored the pitfalls and creative potential of risk through presentations, discussions, provocations and performances.  Read the article in Arts Professional

“This symposium had me considering risk from so many different perspectives – medicine, direction, performance, crime, interpretation offers a crucible for creative dialogue which refreshes and expands my own practice.”  Susan Godsill, Psychoanalyst.

Richard Wagner’s Impact on His World and Ours. 30 May-2 June 2013. University of Leeds. To mark the 200th anniversary on 22 May 2013 of the birth of Richard Wagner, this international conference embraced the multitude of artistic and non-artistic disciplines that have felt the composer’s impact.

Histories of Violence. September 2011. A multi-media web forum exploring the theoretical, empirical and aesthetic dimensions to the problem of violence. Launched to coincide with the 10th anniversary of 9/11 and including filmed symposia, exhibitions and interviews plus a feature on operatic violence. 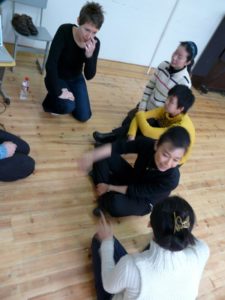 The OPENCOV Experiment. 12 February 2011. Stage@leeds. A one-day symposium which explored and shared the experiences and learning from the OPENCOV project, through workshops, roundtable discussions and presentations. Delegates included academics, performers and a broad spectrum of arts practitioners. 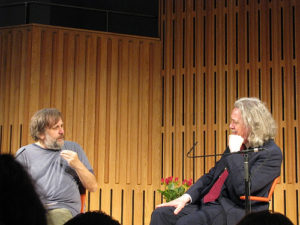 Professor Slavoj Zizek. 10 March 2009. Howard Assembly Room. The International Director of the Birkbeck Institute for the Humanities at Birkbeck, University of London discussed: Brunhilde’s act, or, why was it so difficult for Wagner to find a proper ending for his Twilight of the Gods?  Followed by a Q&A.

Promoting Models of Arts & HE Collaboration. 25 February 2009. Stage@leeds. This symposium explored collaboration and how Arts Council England can support models in the region and included a presentation about DARE. Organised by EIAT Creative Education. 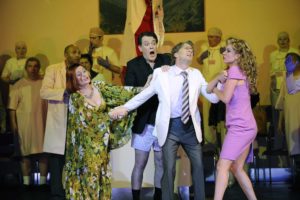 America Elects. 2 November 2008. Stage@leeds. Cultural and political commentators provided an insight into the race for the Whitehouse, to coincide with Opera North’s new productions of Gershwin’s Of The I Sing and Let ’em Eat Cake.  Speakers included David Aaronavitch The Times, Steve Bell The Guardian, and Mandy Merrick, Royal Holloway College.

Music and the Idea of the North. 5-7 September 2008. Leeds Town Hall. The conference – a collaboration between the University of Leeds School of Music and the Institute of Northern Studies at Leeds Met, Opera North, and Leeds International Concert Season – celebrated the 150th anniversary of Leeds Town Hall.  It culminated in a gala performance of Walton’s Belshazzar’s Feast on 6 September, featuring the Orchestra of Opera North.  International speakers from the UK, US, Canada, Scandinavia, Germany, Italy, and Russia, explored relationships between music and northern identities across the globe.

4th Annual Film and Music Conference. 4 – 5 March 2008. Bradford Film Festival. On the theme of Shakespeare, hosted by The University of Leeds School of Music, the School of Art at Brunel University, and the National Media Museum, Bradford, and in association with DARE. Highlights included a keynote interview with Patrick Doyle, and a master class hosted by Gary Carpenter.

Yorkshire Universities Annual Conference 2008.  February 2008. Opera North and the University of Leeds presented the DARE collaboration as a case study of the cultural role of Higher Education.

Shakespeare: modification of text for stage. 30 January 2008. School of Music, University of Leeds. This symposium brought together academics and practitioners to debate the crucial elements in successful adaptation, based on Opera North’s season of new main-stage productions, Macbeth; A Midsummer Night’s Dream; and Romeo et Juliette.

The Orpheus Myth in Modern Culture. 23-25 November 2007. A collaborative venture between Opera North Projects and the University of Leeds School of Fine Art, History of Art & Cultural Studies. Over three afternoons, leading speakers from the arts and academic worlds explored the enduring potency of the Orpheus Myth – from Monteverdi’s opera to American TV series, Buffy the Vampire Slayer. As well as the discussions the conference featured film screenings (including Jean Cocteau’s Orphee and Marcel Camus’ Black Orpheus), poetry readings and live performance.