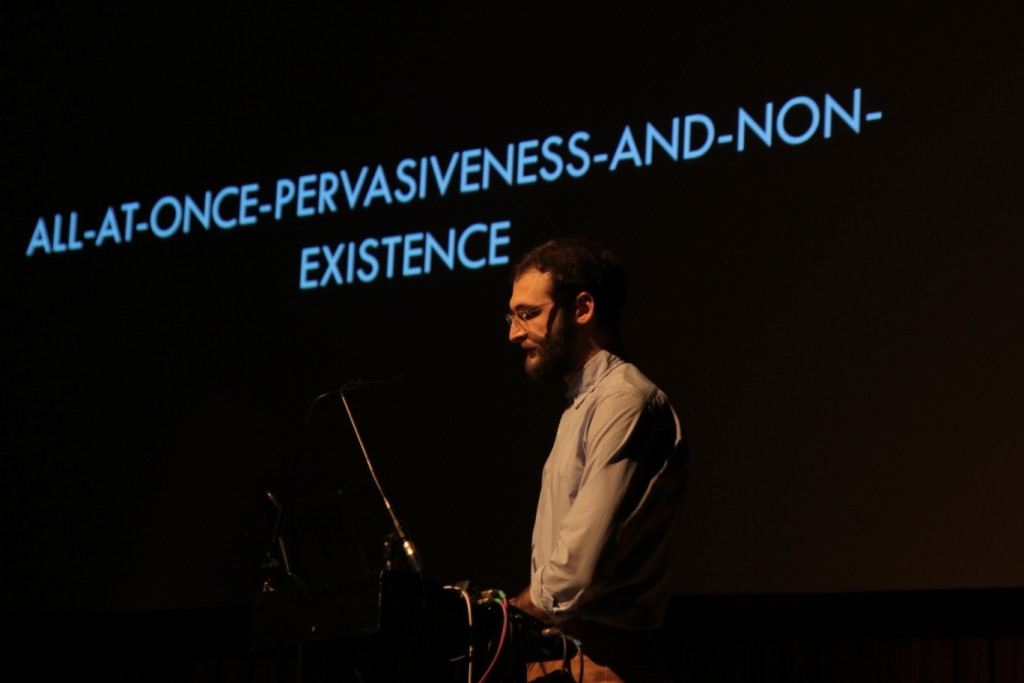 Samuel Hertz, recipient of the first DARE Art Prize, performed his new compositions in the Howard Assembly Room on 29 January.

His first piece, What must have been a painted landscape was performed by members of the Orchestra of Opera North.

“This project opened up so many doors for me in a lot of ways, and allowed me to work in some wonderful ways discovered throughout the process. And of course the support from you all and on behalf of the university was completely invaluable to developing all parts of this project.” Sam Hertz, 2 February 2019.

What must have been a painted landscape…

body split and hand remained untouched with the exception of itself. For piano & chimes

Taking as its inspiration the bounding and leaping patterns of infrasound’s interaction with different atmospheric layers, body split…  utilises different levels of activity at different time-scalings. As the piano part twitches precariously between high and low frequency ranges, it bends in and out of the ‘rhythmic markers’ set by the chimes due to ‘ducting’ and ‘zones of silence,’ two concepts taken from the behavior of infrasound in the atmosphere causing these vibrations to—in a sense—disappear. The piece consists of five sections, mirroring the five main atmospheric layers (including the Exosphere), yet the inclusion of CAConrad’s poetic framing hints at further relationships between the self and the scales of climate ex/change.

*section title generously borrowed from CAConrad’s “Did you ever forget someone can’t help you because they’re dead I’m boring like that” ECODEVIANCE: (Soma)tics for the Future Wilderness. Wave Books, 2014.

What must have been a painted landscape…

Summarizing the past year of research within the DARE Prize framework, various accounts of my engagement with the infrasonic, and a view of the future aims and territories of my research continuing from the project.

Beachfront Property (all the best bits) For electronics

Incorporating aspects from the three standalone pieces comprising Beachfront Property (I. Famous Last Words; II. Compound Memory; III. Patterned Response/Heliotropic Debauchery). Examining topics such as horizons of thought, geologic sound, the ‘infra-‘ as a scale of inquiry, and the history and memory of sound, the pieces making up Beachfront Property use their own interior logics and narratives to re-frame being, listening, and feeling within a changing environment.

Isn’t it funny how the horizon always seems to slip away?

And what might we accomplish by staring at it?

Samuel Hertz (b. 1987 USA), is a Berlin-based composer, researcher, and sound artist working at the intersection of Earth-based sound, sonic sensualities, and climate change. His multi-media work including standalone and IMAX films, performative compositions, and collaborations with experimental performance have recently been seen at Palais de Tokyo (FR), the National Science + Media Museum (UK), Macerata Opera Festival (IT), Charleroi Danses (BE), and ImPulsTanz (AT). His research-encompassing relationships between sound, geography, climate, and social ecologies- is supported within Haus de Kulturen der Welt’s Anthropocene Curriculum (DE) as well as the Centre for GeoHumanities (UK) and Studio Tomás Saraceno (DE).

DARE is a unique collaboration between Opera North and the University of Leeds, the first partnership of its kind in the UK. Having celebrated its tenth anniversary in 2017, DARE is a world leader in building collaborations between the arts and higher education. As two of the UK’s leading institutions of culture and education Opera North and the University of Leeds fuse the artistic with the academic, combining the very best of both organisations to inspire and stimulate new ways of thinking and working.

Launched to celebrate the tenth anniversary of the DARE partnership, the DARE Art Prize is aimed at challenging artists and scientists to work together on new approaches to the creative process.